The Little Dogs that Could

THE LITTLE DOGS THAT COULD 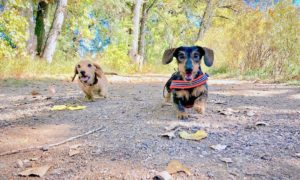 One of the best parts of my job is that I get to travel around the country teaching people how to train show dogs, handle their show dogs and help shy or fearful show dogs. In order to save the hosts money, I always offer to stay at someone’s home so that they don’t have to pay for a hotel. I end up becoming friends with the hosts and it is a lot of fun to stay at the homes of new friends and live with breeds that I usually don’t get a chance to live with. It is a great way to not only learn more about different breeds, but it also helps me see individual dogs in their homes and observe how they live and behave. 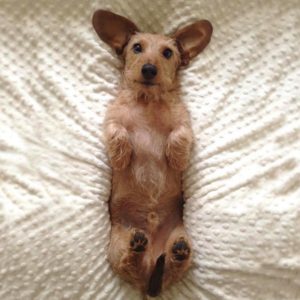 This past weekend was no different. I was invited to teach From Shy to Showy in Colorado and stay at the home of the host, Dachshund breeder Dawn Watters of Ruger Dachshunds. Dawn and her friend Christine Kim organized this seminar and hosted me. This was the first time I was hosted by a breeder, rather than a professional trainer or training club and it was extremely successful. The seminar went great and was well received, but some of the greatest learning moments were those spent at Dawn’s home training her and Christine’s dogs. Dachshunds are, of course, one of my favorite breeds so it was a great pleasure to stay at Dawn’s home surrounded by miniature wirehair Dachshunds, one miniature smooth Dachshund and a very affectionate Afghan Hound named Fiona. 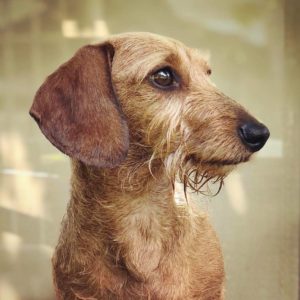 Dawn, with Christine’s help, is an amazing breeder. Dawn and Christine work together to do Puppy Culture with their puppies. Their puppies are given early learning opportunities, enrichment, mental stimulation and along with an impressive breeding program is producing wonderful dogs. However, even dogs that are well bred and raised with an extraordinary amount of work from the breeders can have behavior concerns. Christine and Dawn had been struggling with some reactivity with a few of their dogs despite the same healthy socialization and early care of the litters. I had already worked with Dawn remotely with Logan, a sweet and sensitive 8 year old male Dachshund and now I would get to work with him in person along with Christine’s Jonah (Logan’s brother) and Cherry, her younger female Dachshund.

While all three dogs present with the same observable behavior, the body language and responses is different depending on the dog and the trigger. The issue is that each dog barks at new people, sometimes dogs and sudden environmental changes. This means that they bark and will rush up to new people in the home barking. There is frequently obvious conflict where they seem to want to come up close, but then bark and seem unable to disengage when they are worried. Additionally, Cherry has an issue with being examined on the table by a judge. So, these were all things we wanted to work on.

Some background information to consider first. 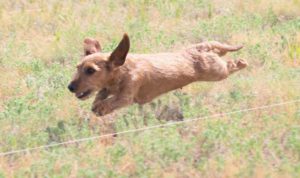 I wanted to observe the dog’s behavior, so I sat on the couch and Logan, Jonah and Cherry were brought in separately to meet me. The other dogs, who can also be barky when excited were loose in the house as well. I set myself up sitting on the couch, no treats on me, just sitting there ignoring the dogs. All three dogs behaved similarly, but with subtle differences: 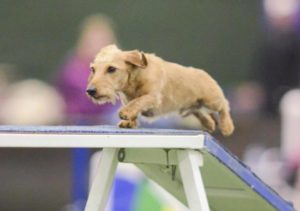 Jonah is a successful agility dog

Now that I have observed the dogs I am ready to put together a training plan. Generally, I plan on tried and true proven behavior modification techniques while always being willing to be flexible based on what the animal needs and the responses we get. I am also always trying new things and experimenting with ideas that I think may be helpful. Sometimes my ideas work and sometimes we go in another direction, but in this case, I am happy to say that the plan I came up with for our sessions with these dogs worked out really well.

The great thing is that since these dogs all have some training under their belts, it makes it much easier to start on the training plan because many foundation behaviors are in place.

Logan has a lot of conflict when it comes to people. He is definitely interested, but also gets worried and doesn’t know how to disengage when he is up close to a person and gets concerned. Also, even if he settles down, the moment someone gets up, he runs around barking. 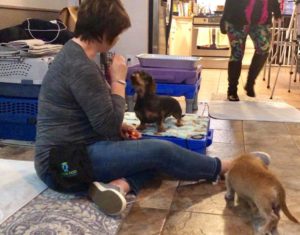 Logan staying on his platform as I walk around the room.

I feel strongly that for a dog like Logan, predictability is important. He didn’t know what to do when he got worried or someone got up. We are teaching him not only to be comfortable when people move around, but we also taught him that if he gets worried or doesn’t know what to do, to go to his platform and Dawn will recognize that as him communicating that he is uncomfortable or unsure.

Christine had not seen Jonah willingly work with someone new so quickly before. We were anxious to try it with Logan and Cherry. Cherry was next and also ended up working with me to the point of not wanting to return to Christine. We then worked on it with Logan who was also successful.

Another thing that I really like about this exercise is that in addition to it encouraging the dogs to approach and work with a new person, it helped to teach them to disengage and move away. This is a much needed life skill for dogs who get reactive and worried about people. 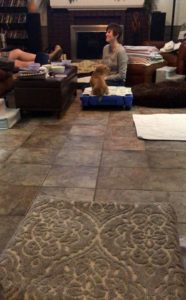 The next day, we had another person available, so we did the same exercises with Jonah, but with Kelly, a new person who he had not worked with before. Jonah began to go back and forth with Kelly immediately and was performing known behaviors for her on cue shortly after.

All three dogs seem to have an issue with disengaging and walking away if they get worried or reactive. I wanted to start working on teaching them this skill of walking away and finding their owner when they are worried.

We worked on this with Cherry by putting her leash and taking her outside. Dawn and I would talk and Christine would walk Cherry up to me and allow her to sniff my leg, while I ignored her, for about 3 seconds. After 3 seconds Christine called Cherry to her while moving away from us and rewarded Cherry heavily. After just a few reps Cherry would sniff me and then look at Christine who would call her away and reinforce her for coming to her.

These dogs are barking, reacting because they don’t know what to do instead. This is important to consider because when we want to change a behavior or get rid of a behavior, the easiest way to do that is to train the animal to do something else.

Finally, we wanted to work on Cherry’s exam on the table. Cherry is a really pretty dog and would easily finish her championship, except that she doesn’t really enjoy showing. Sometimes she is better than other times, but in general she is not a fan of having strangers touch her all over her body.

My recommendation was that Dawn and Christine continue to practice what we worked on with new people. It is important that they choose people that are dog savvy, but who are willing to take direction and stick to the plan. In addition to that, I recommended the following:

On my last morning there, I was sitting on a chair drinking tea. Dawn, Christine and Dawn’s husband Jody were all sitting on the couch. Logan came up to me and asked for attention. I reached down and pet him for a few seconds and then stopped and looked away to give him a chance to leave. He didn’t leave so I petted some more. He climbed up and allowed me to lift him into my lap where I held him while watching TV for quite a while. Being invited to pick him up and spend time with him was both an honor and a testament to the training method. Allowing the dog to choose, giving space and choice goes a long way in building a trusting relationship with an animal. I think Dawn and Christine not only for bringing me to Colorado and hosting a workshop, but also for allowing me to work with and learn from their dogs. I am so grateful for the opportunity! I am excited to be returning in March of next year for three days of training and can’t wait to see where Logan, Jonah and Cherry are in their training programs.