Structure Issues Caused by Our Own Training

STRUCTURE ISSUES CAUSED BY OUR OWN TRAINING?

Huh? What did she say? I am sure you are thinking that this doesn’t make any sense, but once I explain it you may find that you have had something similar occur. Today I was having a private training session for show dog training for a young Portuguese Water Dog who is owned by a colleague of mine. His owner, Ally, is a professional dog trainer and a very good one, but conformation is new to her and her expertise lies in basic training, behavior consulting and dog sports. Nimbus, her dog is only 10 months and already competing in rally and has beautiful focus and positions. 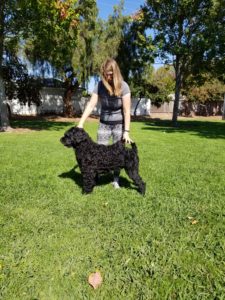 Nimbus is a great dog with a wonderul learning history. He is trying hard to get it right, but he has developed a bad habit as a result of some of his other training.

As we were working with him, she told me that one of the things she really wanted to work on was him placing his front feet properly on the return to the judge from the gaiting pattern. I had her move him and sure enough every time she would come back to me, he would stop and deliberately put his front feet close together. Sometimes he places them so close that they are almost touching. The odd thing was that he really doesn’t move that way. Also, when we stack Nimbus with his front legs where we want them, he holds them there and doesn’t seem uncomfortable and doesn’t move them back. Most of the time when a dog is more comfortable with his feet in a different position than we place them in he will move them back. He doesn’t ever do this.

I suggested Ally see if she can use food to lure Nimbus in a way that causes him to reposition his front foot where she wants it, which is a bit further from the other front foot. Because Ally is a skilled trainer and Nimbus has a strong reinforcement history of being prompted it was fairly easy for him to get him to move that foot into position with just one prompt and after he moved the foot she would mark and reward him with the food. Additionally, Nimbus has been taught “step” which means to step forward with a front foot, so he has some skill at doing a similar behavior.

Next, I suggested adding a new verbal cue or word to this behavior once she is sure she can prompt him into the correct position every time. She would do that by saying the new word and then luring him and then reinforcing him with the treat once he gets it right. Also, anytime he places his front feet properly he will be reinforced for that. 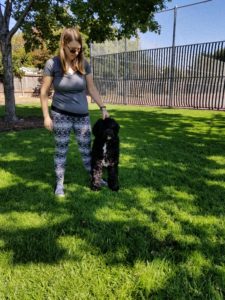 This is how we would like Nimbus to position his front feet.

What is causing him to place his feet this way?

It was initially thought that Nimbus stands with his front legs close together because he is a young dog and has simply not matured. Frequently, a dog will be narrow in the front because the dog is immature and the breadth of chest has not yet opened up. He also sometimes toes out slightly, which also could be caused by immaturity because if a dog’s chest has not filled out the feet will sometimes toe out, but as the chest opens it causes the front legs to turn inward where they should be. 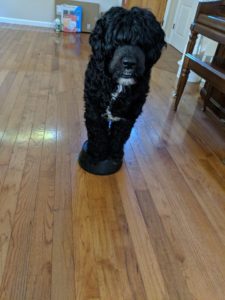 This is the crock that Nimbus practices pivoting into heel position on. You can see how close together it requires his feet to be.

As we were talking and problem solving this Ally had a light bulb moment. One of their main sports is rally and since Nimbus was a puppy, Ally has been practicing heel position with him. When training heel position Ally used a perch for Nimbus to place his front feet up onto. It is very common to use a bowl turn upside down or a round platform as a perch for the dog to put his front feet on while pivoting his rear end around to find heel position. The bowl is small to encourage tightness in positions. Ally told me that they practice this behavior a lot and it is a very strong foundation behavior for him. Nimbus is putting his feet close together because he has gotten into the habit of doing so due to the pivot practicing. It probably isn’t a structural issue at all, simply a training issue.

Once I found out he knows how and enjoys doing front feet targeting work I recommended that Ally use fitness pods to get Nimbus practice putting each front foot into the proper position. Once he can easily do that, we can put that on a verbal cue. Once  we are working on getting it on a verbal cue, by  saying the word before prompting him up there or if he is offering the behavior, saying it right before he offers it and then marking and reinforcing as soon as he steps onto the fitness pods. I would continue pod practice at least as much as she does the pivot work so that the behavior says strong and he regains the muscle memory to stand with his feet in the proper position. 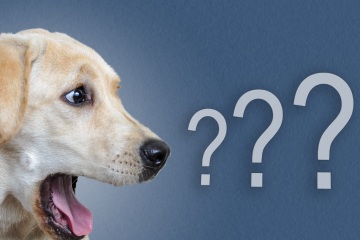 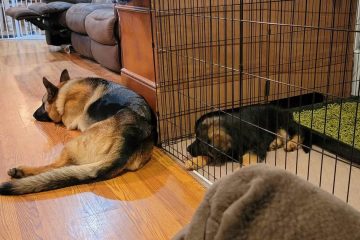