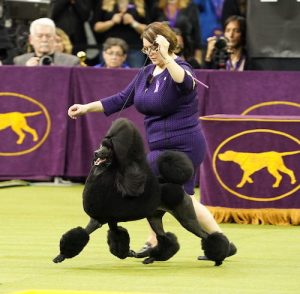 Congratulations to Siba, the standard Poodle and winner of the 2020 Westminster Kennel Club dog show! This year’s lineup was nothing short of amazing. So many gorgeous dogs, it was beyond impressive. That’s not what this post is really about though.

With the recent showing of Westminster, the dog fancy’s Super Bowl, our show of shows, the comments by folks not involved in the sport come creeping out of the woodwork. Because I am friends with many professional dog trainers, most positive reinforcement based trainers, I see the comments made about the treatment of the dogs and the handling in the ring. Journalists and other outsiders to the sport, write articles about our poor show dogs and what they have to endure. It’s really time to set the record straight.

First, I want to explain what dog shows are and what they aren’t. Many people feel that dog shows are nothing more than a “beauty contest”, but this is actually not true at all. Dogs shows were originally started so that breeders could have their breeding stock judged by their peers, who were basically other breeders. There were companion dogs, working dogs, terrier dogs, gun dogs, herding dogs, hound dogs of all the breeds you see today, in and out of the show ring. The dog’s are not judged just on “their beauty”, but on how well they compare to the written standard for that breed. The standard is a blue print that was written by the creators of the breed and then preserved by the breed’s national breed club which is made up of breeders and owners of each breed. The breed standards are written to preserve how the breeds were developed so that the dogs of those breeds can still go out and perform the job they were intended to do.

So, while you may watch the Westminster dog show on  TV and scoff at the clip on the poodles, keep in mind that the clips of the dogs were intended to serve a purpose. In the case of the poodle, the breed is a retrieving breed. Because they would be retrieving in cold water they were cut with hair left on the body to protect the joints and the lungs. That said, my own standard poodle, Dolly, who comes from top winning show dogs, is a companion who I keep in a pet clip.

My own standard poodle, Dolly. Dolly is healthy, beautiful and very well bred, but she will not be shown so I keep her in a pet clip. 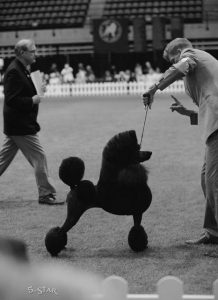 Dolly’s mother, Siri, a show dog who was kept in a required show clip while being shown.

The fact is there is good and bad in all dog sports. I have seen dogs trained and forced with harsh methods, just for a title. I have seen dogs pushed, forced and roughly handled in obedience, rally, bite sports and agility, to name a few. Any time you are dealing with a sport where an animal (or even a human child) is involved you can get into the muddy waters of owners (or parents) who push and force. They make what once was fun and enjoyable for the competitor, a job that is no longer fun for them. ALL SPORTS. Calling out conformation or show dog owners, handlers and trainers isn’t really a fair assessment.

The truth is that there are people who don’t treat their dogs as kindly as I wish they would. There are also plenty of people in the sport who love their dogs just like you love yours. For instance, my show dogs are 100% pets as well. They live in my home, loose with one another. We do not keep dogs that don’t get along, so the only separation here is when someone is in season. Are they crate trained? Yes, they are. Do they require regular grooming? Yes, they do. Do they spend the majority of their time crated or on a grooming table? No, not even close.  My show dogs actually get their daily grooming done while lying on my bed and falling asleep while I do their nightly grooming ritual. 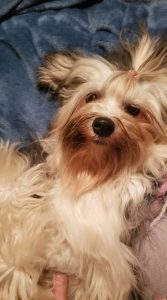 Many of us involved in the sport train and handle our dogs using positive reinforcement methods. This means that we don’t use physical corrections or force, but train the behaviors reliably with methods that are fun for the dogs. We strive to make the show ring an enjoable place for the dog. We want and need our dogs to enjoy the show ring or they are not competitive. So, while we want the dog to have fun, we need the dog to enjoy it in order to be successful. We work hard to make sure that our dogs are confident, socialized and well adjusted. Many of us compete in other sports with our dogs. Several of my dogs compete in other sports at the same time as doing conformation and some do other sports after they retire from the show ring and/or breeding.

Poodle puppy Vandal, learns all about the dog show scene.

Here is something that most people not involved in the sport do not understand….a successful show dog is a happy show dog. The top winning dogs, meaning the ones who you see on the dog shows on TV have a trait called “showmanship”. This means the dog enjoys having people look at it, touch it and yes, admire it. Of course there are some individuals who don’t enjoy the show ring. Dogs who would prefer to do something else, and you know what, those ones usually don’t end up being big winners with truly impressive careers. Because showmanship is necessary! 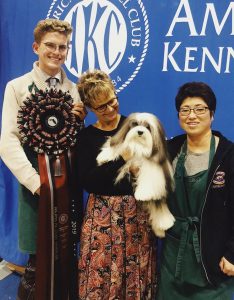 Take Bono, for instance. This is the Havanese and the number one show dog in the country in 2019. The Reserve Best in Show winner at Westminster last year and the Toy group winner again this year. This little dog doesn’t ever seem to tire. He travels all over the country with his handler (who is also a co-owner and co-breeder) and he still shows like a million bucks, every time. He simply must enjoy this lifestyle or he wouldn’t have the success he does in the ring. Bono is a top show dog who is treated like a prince, traveling not only with his handler Taffe, but with one of her assistants. And, they all adore Bono. As a spectator, I love watching this team because he clearly loves it so much.

Now, while there are many wonderful pet owners out there, as a professional dog groomer and trainer, I can tell you that there are plenty of companion dogs in homes that do not seem as fulfilled, enriched or tended to, as many of our show dogs are. We see pet dogs coming in with little or no socialization, covered in mats or fleas and living a life relegated to the backyard. Of course, this is not the case for most pet dogs, so is it fair to lump all pet dog owners together? No, it isn’t fair. It also isn’t fair to assume that all show dogs are miserable and sad.

If you don’t believe me, come to a dog show and meet some of our dogs. You will see dogs being groomed, being shown and just hanging around with their people and having a great time. This is what we want. This is what we strive for. A happy show dog is a successful show dog, why shouldn’t they have the best of both worlds?

Learning to be Your Dog’s Advocate