Should you ever let the dog win?

One big piece of From Shy to Showy is the commitment to giving the dog “choice”. Particularly in the early stages, whether you are dealing with a dog who is very fearful, shy or even just doesn’t enjoy the ring it is important for the dog to learn that they have a choice and that you hear them when they communicate that they are uncomfortable. At one seminar a person described a scenario where the dog was being uncooperative and didn’t want to work with her. She insisted and was bitten, more than once and while the physical damage was very minimal the relationship with the dog was seriously compromised. Because the dog finally gave up and did what was being forced it was determined that forcing the dog “worked”. Of course, the issues with the dog’s performance, willingness to work with the handler and the relationship were not any better after the incident. So, did it really “work”? 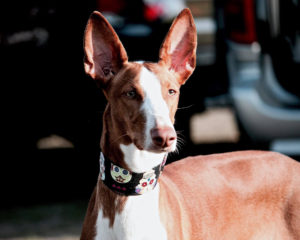 A part of this is about the concern many have to allow the dog to “get away with it” or “win” when they are telling us they are not okay with what is happening. Let me be clear on this, when a dog is afraid or even uncomfortable or concerned he is not getting away with anything. It is not pleasurable or rewarding to any living animal to be afraid. Being afraid is dangerous and unhealthy. Dogs don’t put them in that situation on purpose. It is time we stop looking at our working relationships and interactions with our dogs as win or lose.

Pushing a “win” or victory in the middle of a volatile or delicate situation is a bad idea. For instance, let’s say that your dog is sitting on the couch and you go to sit down on the couch and the dog growls. Many people will say that you much immediately get the dog off of the couch and show the dog who is boss, however, I would argue that this is NOT the time to get forceful or aggressive. First, you are at risk of forcing the dog to bite. Second, you are likely not going to teach the dog what you want to teach him which is that the couch is yours and your are free to sit on it. So, what is the correct way to deal with the situation? In that moment, it really doesn’t matter too much because you are not going to be doing effective training when the dog is already defensive and upset. I would likely try to encourage the dog to get off the couch by calling from the other room and then reinforcing the recall and then I would put an effective training plan into place that addresses resource guarding of the couch. In all honesty, that issue would have been partly caused by my lack of early training, conditioning and boundary setting. I could easily then train the dog to get on the couch only when invited and to get off when asked. I may not even allow the dog on the most coveted furniture as we work through the issue. The point is that you are not doing anything to help the dog’s future behavior of guarding couches by getting into a physical altercation. You are not teaching the dog anything by going crazy and “showing him who is boss”, all you will do is fracture the relationship with the dog and create a pressure cooker because if you suppress the dog’s warning signals and defensive behavior with punishment you are giving the dog no other options and very little choice but to escalate and defend himself further.

Let’s think of our dogs as working partners. Sure, there should be boundaries and sometimes we need them to do what we ask, but the dog failing to do so is due to our shortcomings as trainers. When people say that they “couldn’t let the dog win”, what they don’t understand is that the dog made a choice to let the human win. If a dog really, truly doesn’t want to do something, he won’t and the bigger the dog the less you really want it to come to that because someone is bound to get hurt.

The thing is, dogs are really pretty easy to train. When they are trained with positive reinforcement, they actually enjoy learning. Teaching them new things is easier and makes more sense than trying to punish out behaviors you don’t want. You could spend a dog’s lifetime trying to punish out things you don’t want, when you could simply train some behaviors for the dog to do instead.

Here is a story about two dogs. Lester was born at my house and was my first homebred champion. He won WD at the first national we attended. He was a sweet dog, but when he was an adolescent he growled at me over something. Being much younger and while very dog experienced I really didn’t have a real grasp on behavior or the science of how animals learned. I did what I was taught to do early on, I grabbed him, shook him and dared him to ever do that again. He didn’t do it again, but continued to be a very tense individual. When he was 7 years old he was euthanized after he attacked a guest in our home to the tune of a level 4 bite on her hand requiring a trip to the hospital and sutures. It was devastating and sad for us and I take responsibility for not knowing how to properly deal with a dog who needed help. Fast forward to my current male smooth Dachshund, Venom. When Venom was about 9 months old he growled at me over his food bowl. He would also carry and covet items and growl if you approached. This is about 14 years later after I have spent years doing behavior consulting and training. In the moment that he growled I immediately stopped and knew the best course of action would be to design a training plan. I began by dropping high value food into his bowl while he ate. This is to create a positive association with people around the bowl. As he got happy and expectant every time I approached his bowl (because of the chicken tossing into the bowl) I began to toss from closer. Then, I began to place them in the bowl. They I began to squeeze Cheese Whiz into the bowl. Always watching his body language I worked with him so I could touch him, his bowl, reach into it and move safely all around. It didn’t take long. Now, if Venom has something he isn’t supposed to have he walks up to me with a wagging tail and places it in my hand, even before I ask. He greets all people in our house cheerfully and resource guarding hasn’t been an issue since I started that training. My responses to these similar situations saved one dog and killed another. 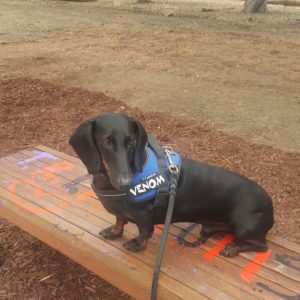 Venom is now a happy, heathy guy who is happy to share his stuff.

Try not to think about it as one winning and one losing. This is a working relationship and as the trainer we are the ones responsible. If an issue arises we need to stop, step back, pull it apart to figure out what is fueling it so we can put together a training plan that both solves the problem and helps the dog.