Many breeders, such as myself, grade our puppies at around 8 weeks old. The official “puppy grading” is when the breeder and the breeder’s friends, mentors and peers get together to look at each puppy as a group and as individuals and decide which puppies are show prospects and which puppies are companions or sport prospects. This is frequently when the breeder decides which, if any puppies they will be keeping to carry on their breeding program. Some breeders choose a different age to evaluate the litter, but generally 8 weeks is when they at least decide who can go to companion homes.

8 weeks is a common time to evaluate puppy litters.

8 weeks old is a great age to evaluate litters. In my experience, what you see at 8 weeks, from a structural standpoint, tends to remain when the puppy grows into an adult. And, while they may go through many structural changes as they grow, if they look solid at 8 weeks they usually hold on to that structure. So, while 8 weeks is a great age to look at the litter and evaluate the structure it is also a time when puppies are likely to be going through a puppy fear period. What this means is that the puppy is more likely to startle and spook and less likely to easily recover. Additionally, when a puppy gets afraid at this age he is more likely to remain afraid of the thing that scared him. This is why many breeders like to keep puppies beyond this age so that the puppy is not going through the stressful event of going to a new home during this time.

I grade litters of puppies frequently. One of my favorite things is to get my hands on as many litters of puppies as possible in order to hone my skill and increase my knowledge. And besides that, it is super fun to do. Grading litter usually involves one, two or possibly a group of people getting together, usually at the breeders house to “go over” the puppies. For me, I prefer to watch the puppies move around freely at first and observe them for a little while. I identify the puppies my eyes keep being drawn to and then I begin my hands on evaluation. We go over each puppy comparing them to the breed standard and evaluating each puppies potential. Then, we decide which puppies will be placed as companions and which puppies will be kept or placed as show prospects.

The problem with this is that because puppies are going through a potential fear period during this time it is critical that they not have a bad experience. Something frightening the puppy during this time can cause a lasting affect and remain with the puppy. Sometimes while people are wanting the puppies to be still and stand properly so they can be evaluated, they sometimes use methods that actually cause fear in the puppies that site. Methods such as pretending to drop a puppy off the back of the table, lifting them up and see-sawing them front to rear or picking them up and shaking them so they don’t move frequently frighten the puppies. Frightening the puppy during a sensitive developmental period can cause the puppy to remain afraid. While it depends on how frightened the puppy is and how resilient the puppy is, it is still a good idea to avoid this for all puppies. People don’t always realize how frightened a puppy is, but just because the puppy remains still or stops wiggling or seems “calm”, it doesn’t mean he is okay or has not developed a negative association to something. Sadly, I have worked with many puppies that developed issues post litter evaluation. I have also witnessed people do these things to puppy and believe wholeheartedly that they aren’t scaring the puppies, just helping them to “stand still”, but the puppy is not moving because he is learned that moving is not safe and he is remaining still to avoid being handled roughly or frightened further. 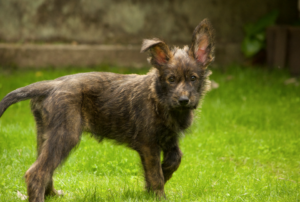 It is best to keep puppies safe from potential scary things around 8 weeks.

When an animal has an experience that frightens him we have no way of controlling or knowing what he will associate with that fear. For instance, if someone uses an electronic shock bark collar on their dog and the dog is shocked after barking at a child walking past the house, the dog may develop a negative association with children. The dog may or may not also develop a negative association with barking, but he may also develop the negative association with children which frequently happens leading to a newfound fearful or aggressive response towards children. Thus, if a puppy is being graded and gets handled roughly or physically corrected while being stacked he may develop a distaste for being stacked, grooming tables, strangers or anything else that his brain happens to associate that fear with.

There are many people who are knowledgeable about breeds, showing or pedigrees but may not know very much about about behavior, body language and how a dog’s brain works. Some people don’t realize the potential damage they could be creating by doing something they consider benign such as shaking a puppy or pretending to drop him off of the table. Even if you don’t believe this, why risk it? You could not take the risk at all by simply making sure that all your puppies interactions and experiences are safe, positive and fun for the puppy while he or shy is in your care. It is so easy to avoid by simply avoiding frightening a puppy during this period. Take extra care to handle puppies carefully, gently and thoughtfully and use treats to make it positive and to lessen the risk of creating future behavior issues. 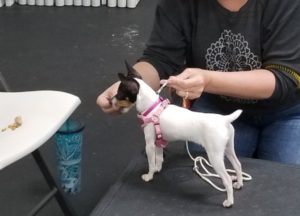 Use treats when stacking puppies to create a positive association.