This past year I changed the direction and focus of my dog training business to work strictly with show dogs. I love helping people shape their dogs into successful show ring competitors.  I offer a Conformation in the Park class which is not unlike a lot of handling classes where we basically run dogs through the show ring paces, individual exams and group work like in the show ring. I also offer a Skill Building and Handling for the Show Ring class where we delve much deeper into training the basics, working on specific issues that students are having and peeling apart behaviors to creatively find solutions. Because my job is to help clients modify or build behavior in their dogs, I can’t help but look at every training issue as a behavioral puzzle. Regardless of whether we are working on a serious behavior issue or teaching a show dog to trot on cue it is still behavior and it all works the same way.

When a client is having an issue with their show dog whether it is a gaiting issue or a stacking issue or an issue with the judge’s exam I pull it apart using the behaviorist’s most helpful tool – a functional behavior analysis. A functional behavioral analysis is a way of looking at the behavior to determine why the particular behavior is continuing to occur. This is sometimes called the ABCs of behavior. It works like this:

B = Behavior – the target behavior we are looking at changing

C = Consequence – what happens just after a behavior

If you look at this way, from a behaviorist’s standpoint you realize that the behavior is driven by the antecedent and the consequence.  These two things must be in place in order for the behavior to continue to occur. The great thing is that while the animal is control of the behavior, we can change the antecedent and the consequence which will change the outcome of the behavior.  Dogs, like all animals, human and non human do behaviors for an outcome. Most behavior that people complain about their dogs doing are happening because the behaviors have been reinforced, usually by the same people that complain about them.

Here is an example that I have dealt with many times:
A show dog is trained not to pull on the leash but to walk at the owner’s side, the dog is reinforced for the behavior of walking and possibly punished for pulling. The owner shows the dog and is frustrated that the dog paces in the show ring. The dog is pacing because he has been taught to accommodate the speed and position of the owner. If they attempt to physically correct the dog they may end up confusing the dog because the dog is only doing what he was reinforced for.  He isn’t really wrong, the owner just wasn’t clear or effective in teaching the behaviors in context and putting them on cue and with strong stimulus control meaning that the dog does the behavior when asked. Is it fair to correct a dog for doing what has been the right choice in the past?  How is he supposed to know the difference if we don’t teach it? If we did a functional behavior analysis, it would like this:

A = owner walks dog on leash

B = dog walks at owner’s side

In looking at this example it is clear that the behavior has a reinforcement history. The dog is actually doing exactly what he is trained to do but the owner has now decided that they want something else. My next job is to determine how I am going to build the behavior of trotting on lead and reinforcing that so we get it on cue and the dog can either walk on leash when asked or gait on leash when asked. It is simple but not always easy to apply.

I am currently working with a dog who I have been challenged with correcting a behavior that we have actually trained and reinforced similar to the example above. Booker is a very confident and social young French Bulldog. He is being shown successfully by his owner Marcella and she has taught him how to do a very pretty and reliable free stack on cue. If she says “stack it up” he will stomp all four feet into place into a beautiful free stack. However, he will always do it at an angle and attempts to get him to straighten out result in him angling himself again. We used a stacking box and a platform with some of his stacking training and he remains on the box and straight. I am certain this happens because the free stack training and practicing has mostly been with him at her side as if she returned from a down and back with her right hand out for Booker to look at.

The antecedent is Marcella cuing Booker to “stack it up” in front of her. Again, he is doing it correctly, exactly as he was taught but we have now decided we want to change it up. The first thing we are doing is dropping the verbal cue “stack it up” unless he is doing his pattern and coming up to the judge. He knows the behavior so now we just have to retrain it with him straight and give it a different cue. This is all, by the way, a result of really great training by his owner.

We have dropped the cue and I also needed to change the “picture” for him. Part of the cue is Marcella saying “stack it up” but dogs are also very in tune to environmental cues. Environmental cues are other things that happen while the behavior happens or just behavior that give additional information to the dog. So, Marcella standing in front of him holding his show lead has become an environmental  cue for him much like you picking up the leash or putting on your hiking boots can cue the dog that you are going to go for a hike. In order to make the picture different for Booker I had Marcella sit in a chair.  We still got an angle so I then added a mat that was large enough for him to stand on square but didn’t allow for him to be angled. We then shaped the behavior of coming to the mat right in front of her. 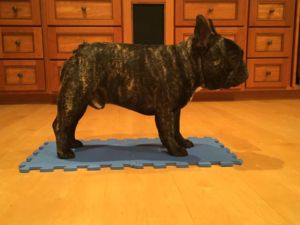 To shape the behavior I had Marcella sit in a chair with the mat right in front of her feet. She would toss a treat in order to get Booker to move off of the mat and reset himself and then when he comes in straight, she marks it with “yes” and then gives him another treat, then tosses another to reset it. The idea is to figure out a way to cause the behavior to happen repeatedly so that we can reinforce it and cause it to happen more.
Once Booker began to understand it we started to put it on a new verbal cue, so Marcella would say the new cue, “front” just before Booker comes in straight on the mat. We then removed the mat and began to cue the behavior with Marcella sitting and then finally with her standing. She practiced a bit at home and in two group classes for fairly short periods of time and are already having success. They will continue to work on it so that it is reliable enough for him to do on cue in the show ring.

Here is a breakdown of the training plan:

I was inspired to write this post because so many times people want to simply make the dog’s behavior stop rather than figuring out why it is happening and figuring out the best way for the dog to have success at understanding what we are trying to teach. If an animal is exhibiting a problem behavior or any behavior that the owner would like to change the best course of action is to decide what you would like the dog to do instead, in this case stand straight, and then train that behavior. This way the dog is taught to do what is desirable, understands it and can get it right and have success. 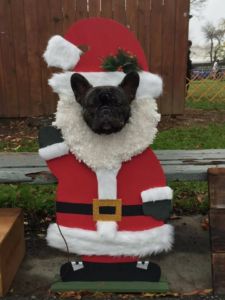 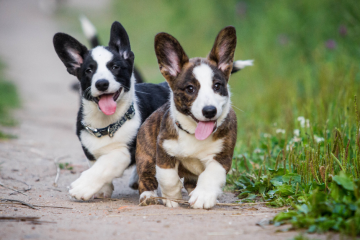 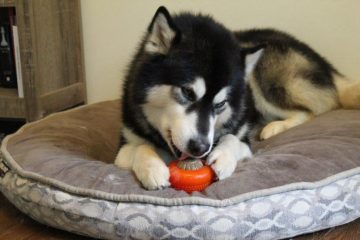 The World Returns to Normal, How Does Your Dog Feel?