How Do You Keep Behaviors Strong?

HOW DO YOU KEEP BEHAVIORS STRONG? 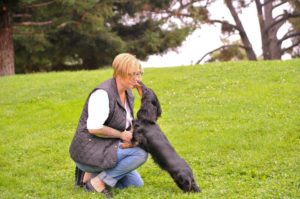 I do not consider a behavior reliable until it has been reinforced many times.  By many I mean hundreds of times. A correct response followed by reinforcement will cause the behavior to occur again, but some behaviors require a lot of reinforcement (such as coming when called off a squirrel) while some behaviors require very little reinforcement (such as finding a stick of butter on the counter). In other words, a dog that is very “foody” probably only needs to find one stick of butter on the counter for the behavior of counter surfing to occur because the butter was so reinforcing.

Once a behavior is learned and even reliable continued reinforcement will be necessary. This doesn’t mean that you need to carry around treats forever, although, for some behaviors such as a very strong recall in distracting environments I may try to reinforce with food whenever I can so that it remains strong.